During my previous pregnancy, I began experiencing some insomnia. I awoke around 3 or 4 am and then lay there for an hour or three aching for sleep while my brain refused to rest.

This pregnancy has been no different. But now for the first time, I am putting to use the laptop that resulted from that insomnia. You see, during those odd waking hours, I would remember letters I never wrote, stories I never recorded, and thoughts I had not expressed. I imagined that if I had a laptop (rather than a PC in some other room), I would miraculously unravel all of the tangles in my brain so it would let me sleep through the night before a baby arrived who made sure to maintain my regularly scheduled sleeplessness.

I forgot about the part where I refuse to get up if no one else has awoken.

My busy brain is forever finding song names and lyrics to match my every thought, so once I decided on a title, I decided that this loose thread could now be born and named in a blog.

In order to meet my match and get married, I found–and then moved on from–a few potential mates. Whatever had initially clicked was no longer sustaining the relationship despite our efforts to develop it. So we both moved on. I refused to keep up with old boyfriends, or even with anyone I’d gone on more than a couple dates with, really. I tend to dwell on the past as it is, and I knew that I would never see the present with any clarity if I were stuck looking back.

So it surprises me whenever an old interest of mine somehow lands in my present.

For some perspective, consider that I had four boyfriends before I met my husband. “Boyfriend” means we got mushy and dated for at least one month. “Dated” means we went on at least three dates. And “date” means time that we intentionally spent together in which there was a concerted effort to get to know one another. I dated maybe six other men who never became “boyfriends.”

So out of these perhaps ten past interests, at least half of them have since appeared out of nowhere: One texted me a year into my marriage, wanting to know what went wrong between us. I had to ask who was texting me since I had long since deleted his name from my phone. When I told him I had a new last name, I hoped he realized it was time to move on.

Before our last move, I walked into my pediatrician’s office to see a “Welcome Dr. So-and-So” sign on the front desk. It was an old boyfriend. We were leaving the state just in time.

Another one appeared with his wife (whose name was eerily similar to mine) and five kids  ages six and under (boy am I glad I dodged that bullet!) in my alumni magazine a few years ago.

Then someone emailed the image of a male model to my mother last year and said, “Isn’t this so-and-so?” It was indeed, my first So-and-So.

But the one that took the cake (do you get one of those with a wedding you plan in five days?) came to me while I made dinner last night. My little sister (how could she remember someone I dated when she was 8?) texted me the article, which I read while browning meat, mixing batter, telling my son to put pants on, and reminding my toddler to not eat the spatula until I was done using it.

After reading (that word now carries more weight–read the article), I went through a very unfair comparative look at myself against this modern wonder bride, who is of course a lawyer and beautiful and articulate and clearly very organized. I decided to abandon that useless line of thought and instead forced myself to move onto the positives: my old interest had lived his life well and found happiness along the way; he had married someone tall! (until you’ve been a tall woman and watched tall men marry short women, you don’t know what “injustice” means).

And then I laughed out loud.

I still didn’t tell him. I just asked him again to go put pants on.

But I will tell you. I laughed out loud because I had told this old interest of mine what his wife’s name would be. In a moment of sentiment I made him a “mix tape.” By then, people were moving on to iPods, and you could burn CDs, but he was pinching pennies and had not installed a CD player in his car, and his iPod purchase was still a future event. He just had a few boring tapes in his console, and I decided to change that for him.

Among the songs dripping with sentiment, I included a Simon and Garfunkel favorite of mine, “For Emily, Whenever You May Find Her.” They never actually say the name Emily in the song, and I may have deliberately mis-titled the song (instead of “Whenever I May Find Her.”) But I included it because on one of our first dates, he had introduced me to friends as “Emily.” The mistake was easily explained, and I’m used to my name getting slaughtered, and I was dazzled by his attention, so I didn’t really care what he called me.

Now after 13 years, he has found Emily. And I would like to say to her, “You’re Welcome.”

We all have an Emily we are looking forward to. My husband and I have a dream–which may look superfluous to some–and a lot of the details right now look like impossibilities. Some days we feel ridiculous for even wanting this dream. Some days we feel selfish because we know how much sacrifice this dream will take. Other days we give up on it and make sure we are not turning our actual life into a nightmare over a dream.

Our “Emily” is in someone else’s care right now. We don’t know when we will find her, but while we plan and prepare, while we search through and agonize over our options, the most important thing we do is pray. We pray for guidance, for courage, for clarity. We pray that we’ll be open to what the Lord has in store for us, even if it isn’t what we had in mind or in the time frame we’d outlined. And we thank him for what we have right now and for all the things he could say “You’re Welcome” for in the future.

I’d also like to dream that if we have our act together, we could jump on our dream in a matter of five short days, should the opportunity emerge.

And if anyone marries (or has married) the person whose photos I am burning in this 2006 image, what I would like to say to you is “I’m Sorry.” 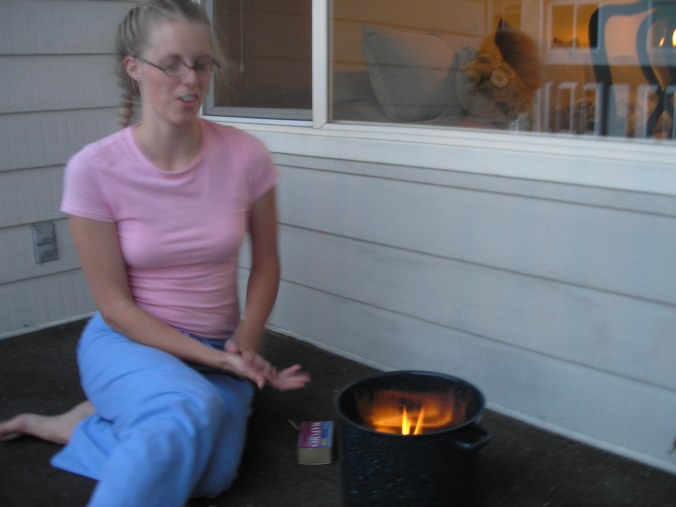 6 thoughts on “For Emily, Whenever You May Find Her”